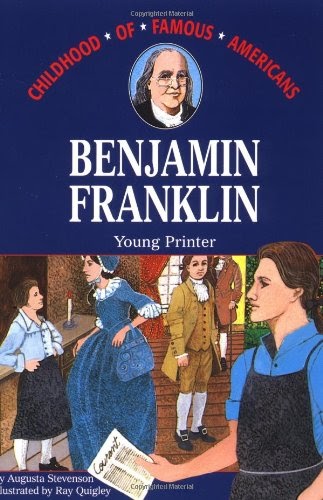 Inventor, author, printer, scientist, politician, diplomat—all these terms do not even begin to fully describe the amazing and multitalented, Benjamin Franklin who was of course also one of the Founding Fathers of America.

At the age of 75, in 1771 he began work on what he called his Memoirs. He was still working on it when he died in 1790 and it was published posthumously, entitled An Autobiography of Benjamin Franklin. The book had a complicated and controversial publication history. Strangely enough, the first volume only was first published in French, in Paris in 1791. Later in 1793 a couple of English translations appeared containing the second volume as well. In 1818 Franklin's grandson brought out a three volume edition, which left out the last unfinished fourth volume. William Temple Franklin also took great liberties with the text and made his own revisions. However, in 1868, publisher John Bigelow purchased the original and complete manuscript and brought out the most complete edition so far. The 20th century saw several scholars bring out more definitive and complete versions.

An Autobiography... was written apparently to apprise his son about the events of his life and also meant to be a treatise that would lead to the self betterment of the younger generation. As a book, it is a difficult and complex read. The tone is often meandering, arrogant and condescending in turn and does not have a consistent feel. Written over an extended time period, there are large gaps in sequence and often the author contradicts his own recounting of events. In fact, it ends abruptly, without a shred of information about Franklin's seminal role in the American Revolution. Yet, two centuries after its debut, it remains widely read and acclaimed, valued for its being almost the first autobiography to have been written in English. Its extensive advice on how to go about achieving a list of virtues is probably the first ever self-help book.

As a glimpse of life in 18th century America, it is unrivaled. An Autobiography... also provides readers with the immense possibilities that the New World holds. A poor middleclass youth, one of 10 children, whose parents could hardly afford to send him to school, who attains learning and honest employment by dint of sheer hard work can even today be said to represent the American Dream. With the publication of An Autobiography... it was possible for this new and emerging superpower to establish a history and tradition of its own.

Who Was Ben Franklin For Kids

As a slice of history, An Autobiography of Benjamin Franklin is indeed an interesting and riveting read.