I love this song by the late Rich Mullins. And one line in particular stands out “there’s so much beauty around us for just two eyes to see.

Now one might listen to this song and immediately be struck by some contrasts. The first is that he seems to suggest that God is really at work in America, as opposed to other places. But I think that misses what he is saying in this song. It’s not an anthem about nationalization but about God’s work through the world that he created. And this raises an obvious observation regarding all the ugliness in the world. Sure it is beautiful for some, but what about all the displays of our broken world – poverty, homelessness, abuse, crime, drugs, urban blight.

Because the reality is that we do live in a broken world. If we are to take the events of Genesis 3 serious, we acknowledge that something went terribly wrong that subjected all creation to sin and futility, as Paul tells us in Romans 8. We cannot ignore the depravity of humans, who cannot accept God on his terms except for the intervening work of the Holy Spirit. Man’s rejection of God through acceptance of his Son has certainly created animosity against his creation, creatures included. One only needs to take a glimpse at the news to know that’s true.

But at the same time, Scripture shows us another story. That man is created in the image of God. Now much ink has been spilled about the definition of imago Dei. But I think a definition that incorporates a holistic picture is probably the most faithful – rational, relational, creative. Romans 1:18-20 says,

For the wrath of God is revealed from heaven against all ungodliness and unrighteousness of man, who by their unrighteousness suppress the truth, for what can be known about God is plain to them, because God has shown it to them. For his invisible attributes, namely, his eternal power and divine nature, have been clearly perceived, ever since the creation of the world, in the things that have been made. So they are without excuse.

Though truth is suppressed, there is something perceived about God that will work its way out into the way we relate to the world. If we go to the next chapter of Romans, Paul talks about the conscience of man being impressed with the qualities of God. So God has set eternity in the hearts of humans (Eccl 3:11), which means there’s something instinctively considered beyond ourselves that represents God’s goodness even when it is tainted with the ugliness of sin. 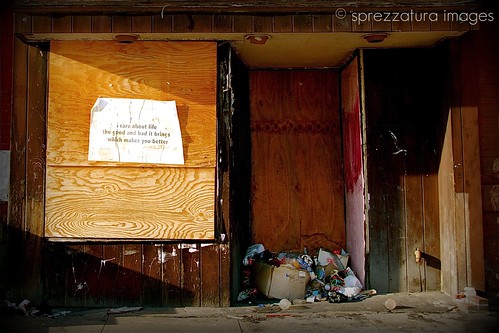 So it seems to me Scripture itself presents us with contrasts as we observe our world. That beauty is juxtaposed to ugliness, depravity to redemption, truth to lies and the portrayal of man’s goodness to his wickedness – all mixed together. Just because man is depraved does not mean he only performs wickedness. Otherwise, we would never see anything good come from non-Christians. And we know that’s not the case. On the flip side, stories abound of Christians who have displayed acts of wickedness. So defining beauty vs ugliness of the world based on the behavior of Christians vs. non-Christians results in a futile exercise and myopically views how God is working in his creation.

What do we make of this contrast? I propose that it behooves us to be alert and even look for ways in which God is working through his creation. I often find that this gets reduced to natural elements such as mountains, stars, flowers, birds, etc. But that too shortsighted. The characteristics of God that Scripture said everyone knows in their heart can help but be be displayed in created products as man reaches for God, yet rejecting him at the same time. We see this in the way humans relate to each other as well. Even though dysfunction and all kinds of relational malfeasance is present, there is something that makes our hearts soar when good towards others is shown. It’s why human interest stories are so compelling.

This is where I believe a healthy understanding of culture is needed. If we consider culture as something that is evil and Christians should avoid, then we’ll fail to see the beauty of how humans demonstrate their imago Dei-ness, even when rejecting the provisions that reconcile us to the Father by believing in his Son. Andy Crouch says, “Culture is what we make of this world – we start not with a blank slate but with all the richly enculturated world that previous generations have handed us.”[1] Culture is not something out there but something we find ourselves in the midst of everyday.

When it comes to Christians and culture, this contrasts creates all kinds of tensions as rightly it should. One way of dealing with this tension is to reject anything that is deemed worldly, meaning a product of man that does not use Christian as an adjective. The problem with this severe sacred/secular divide is that all through Scripture we see God’s intentional interaction with the world. The more I have engaged in Biblical studies, the more I see that the Bible itself is a cultural product. In God’s self-revelation, he used what was going on in the culture to do something unique, demonstrating that he was the one true God. During Jesus’ earthly ministry, he used the very things which provided meaning to people in a particular culture to show that he was the Christ, the eternal Son of God, sent to rescue humanity from their sins.

But more importantly, its about how people and how they relate to their world. I actually think it makes us better witnesses when we observe the many ways in which man gropes for God, even though suppressing the truth about him. Paul demonstrates this masterfully in Acts 17:22-31. That we have as inspired text a quote from the poetry that the Greeks produced that says something of what they know about God is pretty telling.

Listen, finding depravity is pretty easy. In fact, I think some Christians specialize in highlighting. But finding God’s beauty in art, other created products and all the other ways in which people make meaning in their lives is just as important. It is not something to disdain. God’s beauty percolates through it. Look for it. It is all around us, even in the midst of ugliness.